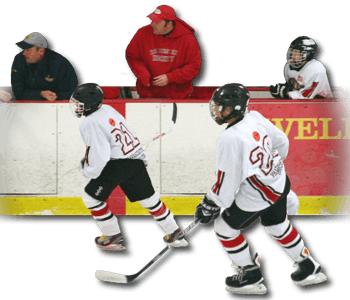 The Rochester Hockey Foundation (RHF) is a non-profit organization founded in the 1960s by Ken Johannson and Arley Carlson from the Rochester Mustang Senior hockey team.

Founded in the 1960s by Arley Carlson and Ken Johannson, both players for the professional Rochester Mustangs, the Rochester Hockey Foundation (RHF) was primarily a sponsor of hockey schools for kids. In the early years both men paid for the facilities from their own funds, and came out on the ice to work with the kids. As the program grew and moved to the Recreation Center from the old Mayo Civic Auditorium, the foundation began supporting capital improvements at Graham and the Rec Center, and provided grants to high school seniors for scholarships and post-season events.

RHF has reinvested its funds into the local hockey community for over 35 years. We operate clinics and schools supporting youth hockey in the Rochester / Olmsted County area including

Your contribution to the Rochester Hockey Foundation Helps promote youth hockey in our community. RHF is a non-profit organization. All contributions are tax deductible.