Fair Play in Youth Hockey Tournaments: Is it Necessary? 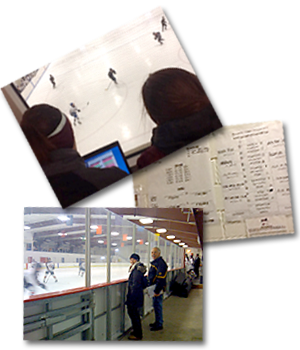 The outcome variables of interest include the injuries that occurred, such as medically diagnosed concussions, penalty minutes, types of penalties, Fair Play points earned, and individual exposure time (IET). Individual Exposure time is important so we can learn if players are receiving equitable time on ice playing the game they registered to participate in. Players and parents who provided consent have enabled the research team to study concussion surveys and injury reports This additional information from the surveys and medical reports will better educate us about player motivation, previous diagnosed concussions and any symptoms players may experience during hockey activities. This research study was funded by the USA Hockey Foundation to determine if Fair Play has an effect on game safety.

Our research efforts were bolstered by both Mayo Clinic physical therapy students and graduate students in the School of Kinesiology at the University of Minnesota. Specifically, they collected IET at both tournament locations. Mayo Clinic developed IET software specifically for the Fair Play tournament to facilitate a comparison of Fair Play and regular tournament rules.

If there are differences in both injuries and outcomes between the two tournaments, it can be implied that:
1. If fewer injuries occur in tournaments governed by intensified Fair Play, Minnesota Hockey could mandate that all invitational tournaments be governed by Fair Play.
2. If more injuries occur in tournaments governed by intensified Fair Play, the incentive of an extra point, even when used as a tie-breaker, is not sufficient enough to elicit behavioral modifications.
3. Differences in penalties can result from inconsistent officiating (i.e. the fear of making hard calls to deter aggressive behavior) versus lenient officiating that can result in more head hits, checking from behind and other injurious behavior.

The data are being analyzed and will be available to USA Hockey, Minnesota Hockey, Rochester Youth Hockey and Woodbury Hockey in a subsequent detailed report. Results will also be used to prompt rule changes that can be evidence-based (i.e. requiring the enforcement of Fair Play during both the regular season and tournaments) to reduce the likelihood of injury and concussion. The results of the study will be interpreted in context of the Fair Play component of the Minnesota Hockey Education Program (HEP). It is our belief that Fair Play is a necessary component to keep the game of hockey safe and sportsmanlike.

Photos on this page show the intensified Fair Play milieu in Rochester, the bracket standings that depicted if a team had earned their Fair Play point during each game, students and research personnel in both venues, as well as images of IET data collection, a process that requires both a spotter and a recorder.