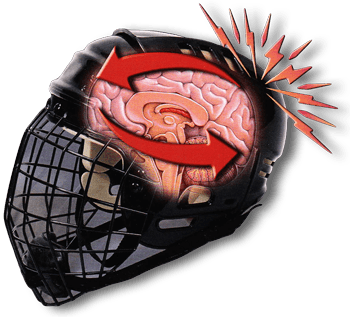 The Rochester Ice Hawks have a continuing partnership with Mayo Clinic Sports Medicine Center in the realm of concussion research.

Mayo Clinic Ice Hockey Research Team’s concussion studies with the Ice Hawks began in 2011-2012, led by Aynsley M. Smith, RN, PhD and coordinated by Dan Gaz. Players were outfitted with CCM Vector helmets which included a device that captured how fast, how hard, and how often players were hit during competitive games.

At the end of the season the findings showed that some players who were not diagnosed with a concussion experienced similar impacts to those players who were. But why? Were some players more affected by high impacts than others? Did the helmets record impacts incorrectly? (This was later ruled out.) Was it possible some players did not recognize or admit their symptoms?

Those findings and the subjective nature of the current clinical diagnosis prompted the Ice Hockey Research Team to focus on improving the concussion diagnosis. The current clinical diagnosis relies heavily on a player’s self-report of symptoms. Although this can provide valuable information to a team doctor or athletic trainer, certain circumstances such as a player’s age, past concussion history, and motivation to get back on the ice can easily influence the diagnosis.

Last season (2015-2016), with support from the USA Hockey Foundation, Dr. Smith’s direction and Janelle Jorgensen’s coordination, the Ice Hawks participated in a first-of-its-kind study to improve the concussion diagnosis process. The Ice Hockey Research Team collected data using three objective measures – The King-Devick Test, the NeuroCatch quantified EEG, and blood biomarkers – which cannot be affected by a player’s motivation to either stay in the game or sit out.

The King-Devick Test consists of three numbered cards that increase in difficulty. A player’s times and errors are recorded as the cards are read out loud. This score can indicate if the player’s attention and reaction time have been affected by a concussion.

The NeuroCatch is a quantified EEG that uses a non-invasive portable electrode cap. While wearing the cap, players listened to a series of tones and word pairs. The brain activity measured by the cap can show if any changes occurred in how a player interprets information and concentrates after a concussion.

Finally, analysis of no more than a half tablespoon of blood may indicate whether or not a concussion has occurred by showing levels of brain cell breakdown after players are concussed.

Preliminary data analysis shows that the King-Devick Test and NeuroCatch qEEG display changes from baseline after these diagnosed concussions. These measured changes are expected to improve the concussion diagnostic process.

The Ice Hockey Research Team is proud to announce that its research partnership with the Ice Hawks will continue during the 2016-2017 season. In August 2016, participating players will complete the same surveys and three objective measures, and will also wear a Bauer ReAKT helmet and special headband device which will measure impacts. The device will collect impact characteristics in real time, which will provide additional information about concussions.

Drs. Stuart and Smith led Ice Hockey Summits I & II: Action on Concussion in 2011 and 2013 and will host Ice Hockey Summit III at Mayo Clinic in September 2017. Important hockey organizations such as USA Hockey, the International Ice Hockey Federation, the Hockey Equipment Certification Council, and the American College of Sports Medicine have expressed interest in providing support. Thorne Research, the Johansson-Gund Endowment, and the Brian Mark and Martineau Family Gifts will also be providing support. Information from the Ice Hockey Research Team’s study with the Ice Hawks during 2016-2017 will be shared at Summit III to benefit hockey players of all ages and levels of participation, nationally and internationally.

Hockey has many obvious benefits: staying active, improving skill sets, team camaraderie, and – at all levels – the opportunity to advance, whether to a first on-ice shift, earning a spot on the A-squad, or continuing to play in college and beyond. The Ice Hockey Research Team and the Ice Hawks staff hope our concussion research partnership will soon ensure that hockey players are safe while playing the game they love!